An Affliated to AICF & Recognised by Jharkhand Olympic Association 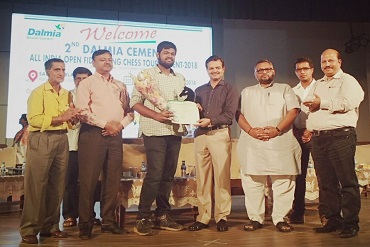 Arpan Das scored 8.5/10 and won 2nd Dalmia Cements All India FIDE Rating Chess Tournament 2018. He defeated GM Saptarshi Roy Chowdhury of RSPB in the last round with Black pieces in a must-win situation, won the tournament. There was a six-way tie at 8 points a piece. CM Aronyak Ghosh finished at 2nd position due to a better tie-break score. Kaustuv Kundu and Shrutarshi Ray secured 3rd and 4th position respectively. Top seed IM Arghyadip Das finished at 5th position. Among local players, Priyanka Kumari of Jharkhand finished at 6th position with 7.5 points. We have a detailed report with photos, videos and annotated game by the champion, Arpan Das himself. 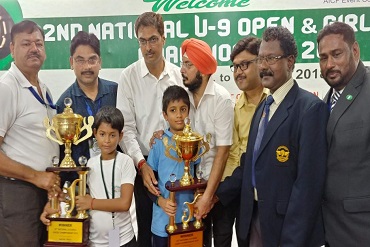 The champions of 32nd National under-9 : Sneha Halder and Ilamparthi A R,Ranchi

Ilamparthi suffered his first and only loss in the last round against Kush Bhagat of Maharashtra. However, that did not change anything for him, as Ilamparthi had already become champion after the conclusion of 10th round. Sneha drew her final round game against Indira. She needed Suhaani to win for her to become champion and that is what exactly happened. Mayank Chakraborty, Yash Bharadia and Kush Bhagat all three of them scored 9.0/11 and they secured 2nd, 3rd and 4th position respectively. In the girls section, Suhaan Lohia scored 9.0/11 and finished 2nd, while Indira Priyadharshini Subbu scored 8.5/11 and secured 3rd position. 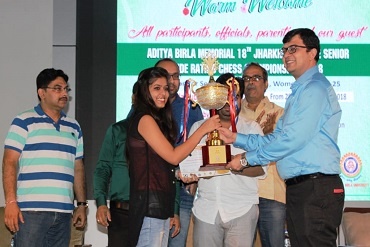 State Open Champion for 2018 Ms. Priyanka Kumari of West Singhbhum. She tied with Swaraj Palit of Ranchi with 8 points each out of 9 games. Priyanka is the first women player to win this Championship. This year again the tournament did not go well for the top seed Pritam Singh of East Singhbhum as he conceded 3 loses in last 4 games after a perfect start 5/5. This year we had 158 participants from East Singhbhum, West Singhbhum, Ranchi, Chatra, Saraikela Kharsawan, Dumka, Hazaribag, Simdega, Koderma, Dhanbad, Bokaro participated this year. The event took place in the premise of the Sarla Birla Public School from 28th June to 1st July 2018.